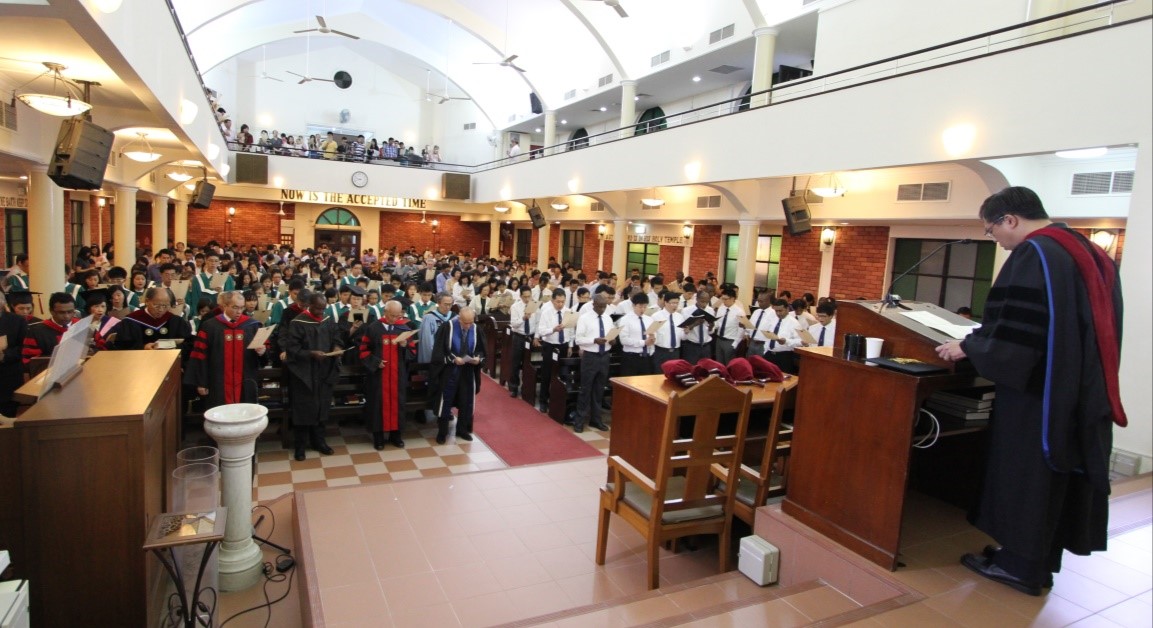 We Are Not Alone

“I am alone!” That was what Elijah said after he defeated the prophets of Baal, “I have been very jealous for the LORD God of hosts: because the children of Israel have forsaken thy covenant, thrown down thine altars, and slain thy prophets with the sword; and I, even I only, am left; and they seek my life, to take it away.” (1 Kgs 19:14). God had to tell him that he was not alone, “Yet I have left me seven thousand in Israel, all the knees which have not bowed unto Baal, and every mouth which hath not kissed him.” (1 Kgs 19:18). Commenting on this episode, Paul said that there is always a faithful remnant, and we say likewise, “Even so then at this present time also there is a remnant” (Rom 11:5).

When we fought the good fight of faith for the Verbal Plenary Preservation (VPP) of the Holy Scriptures about two decades ago, we were told by our opponents and detractors that we were alone on this, that nobody believed this. They said our belief in VPP was “foolish faith”, that VPP is a “new doctrine” and “heresy”, and that we are going to be “the laughing stock” of the world.

By the grace of God, we held firm to the truth of VPP as taught in Psalm 12:6–7, “The words of the LORD are pure words: as silver tried in a furnace of earth, purified seven times. Thou shalt keep them, O LORD, thou shalt preserve them from this generation for ever”, Matthew 5:18, “For verily I say unto you, Till heaven and earth pass, one jot or one tittle shall in no wise pass from the law, till all be fulfilled”, Matthew 24:35, “Heaven and earth shall pass away, but my words shall not pass away”, and many other verses and passages in Scripture. We believe without doubt that God has indeed preserved every jot and tittle of His inspired words as He promised, and that we have His very words and every word in our hands. Where then are they? They are in the Hebrew and Greek Scriptures (ie the Hebrew Masoretic Text and the Greek Textus Receptus) on which the Authorised Version (AV) or King James Version (KJV) is based. 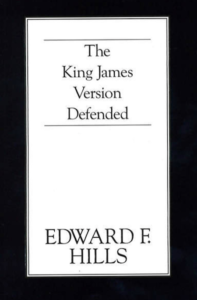 We may feel we are alone, but we are not. When I wrote to Dr. Edward F Hills in 1997 (not knowing that he had already been called home in 1981) for permission to use parts of his book—King James Version Defended—for my lecture notes on VPP, his wife—Mrs Marjorie Hills—so graciously replied, “It is indeed very encouraging to learn that a Presbyterian College is a strong supporter of the KJV. The King James Version Defended, will furnish your students with the facts they will need for its defense.” It was interesting for me to note that she was encouraged by a Presbyterian College taking a stand for the KJV. I suspect Dr. Hills who was Presbyterian fought a lonely battle in his day.

In the last century, the Bible Baptists and the Independent Baptists were the ones at the forefront defending the KJV. In those days, we really did not hear of any Reformed or Presbyterian ministers, churches or schools defending the same except for a very few. Dr. Hills was perhaps the lone voice. We were also a lone voice in the wilderness of ignorance and unbelief here in Singapore when we earnestly contended for VPP some 20 years ago. But the Lord knows we were not alone; there were others who did not bow their knees to the Baal of modernistic and rationalistic textual criticism, who also upheld the good old Text and the good old Version. 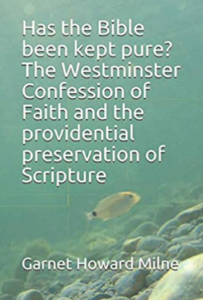 More and more of the faithful remnant are now coming to the fore to speak up for the divinely inspired and preserved Text. They are promoting and defending the inspired and preserved words of God biblically, theologically, and historically. One such faithful scholar is Garnet Howard Milne who authored Has the Bible Been Kept Pure? The Westminster Confession of Faith and the Providential Preservation of Scripture published in 2017. Dr. Milne was absolutely right to observe that the preservation of the Scriptures “cannot be construed to mean that God has kept his Word pure in some as yet undiscovered place, and the church must carry on with an imperfect Bible in a seemingly endless hope that one day all the textual critics (most of whom are modernists who reject any notion of biblical inerrancy) will all agree on the identity of the autographic text.”

Dr. Milne was also spot on to observe that “The canon was not something decided upon by the elite of the church and then commended to the ordinary folk in the pews. It was something confirmed and received individually throughout the centuries ever since God had first dictated those Scriptures for the church, a church which consisted of the whole multitude of believers. This means that the common or received Greek text of the New Testament and the Masoretic text of the Old were considered by [the Reformers] to have been the authentic text.” Indeed, this is in keeping with what Jesus said, “And when he putteth forth his own sheep, he goeth before them, and the sheep follow him: for they know his voice. And a stranger will they not follow, but will flee from him: for they know not the voice of strangers…. My sheep hear my voice, and I know them, and they follow me” (John 10:4,5,27). The divinely inspired words of Scripture can only be spiritually discerned and recognised by Spirit-filled believers. “Now we have received, not the spirit of the world, but the spirit which is of God; that we might know the things that are freely given to us of God. Which things also we speak, not in the words which man’s wisdom teacheth, but which the Holy Ghost teacheth; comparing spiritual things with spiritual. But the natural man receiveth not the things of the Spirit of God: for they are foolishness unto him: neither can he know them, because they are spiritually discerned.” (1 Cor 2:12–14). 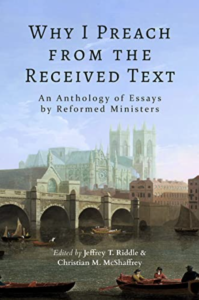 By the grace of God, there is now a growing movement for the “Confessional Text” (also known as the “Traditional Text”, “Received Text”, “Ecclesiastical Text”, “Reformation Text”, “Canonical Text”, “Standard Sacred Text”). This movement, in primarily Reformed circles, is calling all Sola Scriptura believers who regard the Bible to be the sole and supreme authority of their faith and practice to return “to the Bibliology of the men of the Reformation and post-Reformation (Protestant orthodox) eras. Those godly men maintained that the Lord had not only immediately inspired the Scriptures in the original Hebrew and Greek, but that he had also kept them pure in all ages (cf. WCF and LBCF, 1.8). This led them to affirm the classic Protestant printed editions of the Masoretic Text of the Hebrew Old Testament and the Textus Receptus of the Greek New Testament as the standard text of the Christian Bible.”

Dr. Jeffrey Riddle and Rev Christian McShaffrey—the leaders of the Confessional Text movement—have compiled and edited an anthology of essays penned by “Pastors, Teachers, Elders, and one Deacon, coming from Reformed, Presbyterian, and Baptist traditions. These men hail from places across the English-speaking world, including Australia, Canada, the United Kingdom, and the United States.” The anthology is published with the title, Why I Preach from the Received Text (USA: The Greater Heritage Christian Publishing, 2022). It is the hope of Riddle and McShaffrey “that each reader’s confidence in the integrity of Scripture will be increased as he moves through the pages of this book. We particularly desire that those ministers and their congregations who have stood fast in their use of the traditional text, even when it seemed they had few allies and many adversaries, will be encouraged by this work, knowing that they do not stand alone and that this position is neither unreasonable nor obscurantist. It is also our hope that a new generation of young believers and young men called to ministry might be prompted by this work to give careful consideration regarding the text of the Bible they choose to embrace.”

I was given the privilege to preview this book before it was released, and I must say I am encouraged by the testimonies of the 25 presbyters and church leaders who have the faith and conviction to preach and teach from the absolutely authentic and authoritative texts of the Holy Scriptures that God had inspired in the beginning and has preserved from the beginning. Ministers of the Gospel today can preach with confidence—“Thus saith the LORD,” “It is written”—when they preach from the traditional Hebrew Masoretic Text and the Greek Textus Receptus on which the AV or KJV and other faithful and accurate translations of the Bible are based. 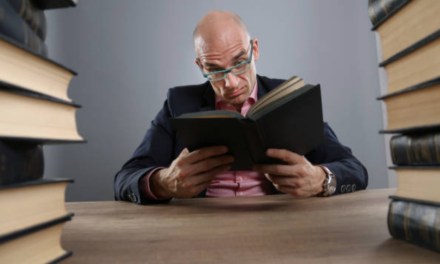 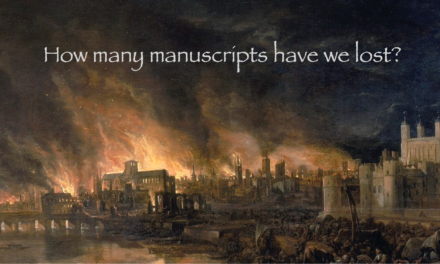 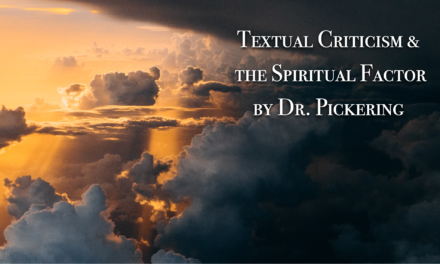 Textual Criticism and the Spiritual Factor 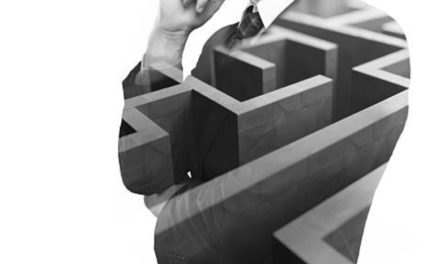